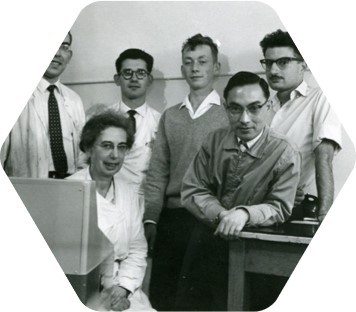 Lucia de Brouckère (1904–1982) was a Belgian chemist. As chairman and vice‑chairman of the Faculty of Science between 1959 and 1963, she promoted a new curriculum, and helped to rebuild the Chemistry Department of the Université libre de Bruxelles (ULB) after 1968. She distinguished herself at a time when women were still fighting for their rights and a better place in society. She was not only the first woman to become a professor at the Faculty of Science of the ULB, but also the first Belgian woman to participate in Solvay conferences on chemistry. She attended each of them from October 1928 (the third one) until her retirement in 1974. Despite her knowledge of chemistry and her position in scientific institutions, for example as headmaster of the Belgian Chemical Society in 1960, she never participated as a speaker during Solvay conferences. At a time when only very few women could access a higher education, and even less entered an academic career in Belgium, Lucia de Brouckère’s profile strikes as exceptional. Her systematic attendance as a passive actor at the Solvay conferences provides a unique case study of what it meant to be a female scientist in a prestigious man‑only environment.